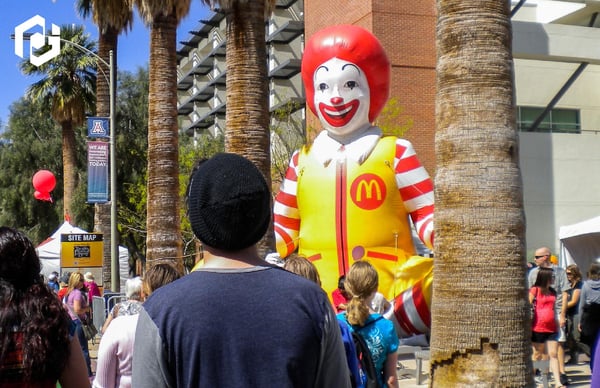 Ronald McDonals is the unmistakable McDonald's mascot. The McDonald's logo is easy to recognize, regardless of where you are at. Their brand recognition is larger than that of the Christian cross. Not to mention the 36,899 (2016) facilities they have around the world and the fact that they serve 68 million customers per day. Believe it or not, that is close to 1% of the population on earth!  The company is the 7th most powerful company, according to Forbes. We know all of their jingles and there is no question about it, you know Ronald McDonald. He became a huge part of their marketing campaigns in the mid 60's after a couple of years after they had created him. He came to be known as "Ronald McDonald, the Hamburger-Happy Clown" and then he started airing on t.v. and it was an immediate success. Children loved him and found him to be really funny. His official title was Chief Happiness Officer.

Ronald is no longer makes T.V. appearances as often as he used to but he is still widely recognized as the eternal McDonald's mascot. He can still be seen on Happy Meal boxes and artwork. You can also get a glimpse of him in the Ronald McDonald House Charities. The 25 foot inflatable was commissioned for McD's to take to events and bring awareness to the RMHC program.  They would then inform people how to help families, children, hospitals and students in need. The large mascot is definitely easy to spot because it is just so big, but when you give it the recognition the brand has it is unavoidable to see. When people see a large inflatable like this at events they usually crowd around them to get a picture with them because they are uncommon sights. These ornamental novelties can be customized to be your company logo, mascot or even the very products you offer and people bound to show up.

Are you looking to bring a figuring, mascot, or character to life? Contact us and let us know what you have in mind. We will work with you hand in hand to make sure we can bring your vision to life as accurately as possible. Need a specific size? No problem, we manufacture big and small inflatables in almost any size. Need a specific color to match your brand? Well... that's not a problem either since we can definitely deliver that too. For this inflatable we looked at an old model and recreated it with touch ups in printing, shaping, and proportioning. Since we manufacture everything in house the entire creative process is in our hands and you deal directly with us instead of relaying your vision to multiple parties. When a project is created, we assign a designer to the project and they focus on making any changes necessary to make sure you are satisfied with your order. Give us a call or shoot us an email and we will get you a quote, a mock up and multiple options to start!