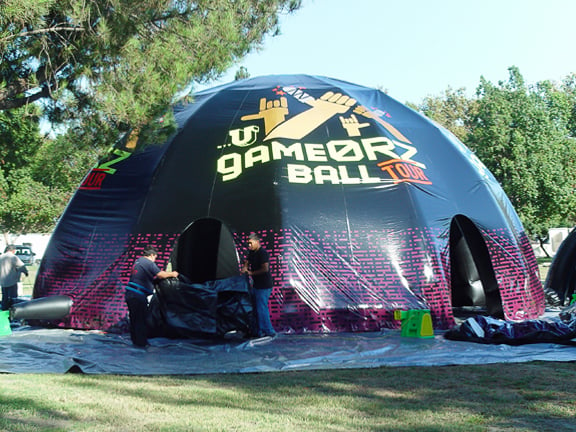 MTV is known for having some cool stuff at their shows and events, and when they reached out to us wanting something unique and engaging for their outdoor marketing campaign, we collaborated and came up with the Inflatable MTV Domes. Sorry, it wasn’t the top-secret military testing base you were hoping for, it was actually an interactive game that allowed users to navigate through a laser tag maze. How cool is that!? These Inflatable MTV Domes featured fully printed covers, as well as custom crafted connecting tunnels. The design ended up being different than what you would usually see at events. As such, it drew in crowds of curious attendees from far and wide. 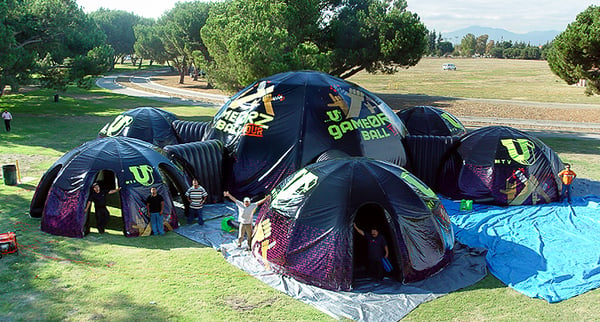 These Inflatable MTV Domes were constructed using the highest quality vinyl and polyester fabrics available. The internal structure of these Inflatable MTV Domes were constructed using two and a half foot tubing throughout the entire inflatable frame. Tubing of this size provides sound structural integrity, while maximizing interior space. The resulting architectural design provides a dynamic and effective use of inflatable materials, thus keeping cost down.

Design is one of our greatest strengths and when we work on large scale projects, such as these Inflatable MTV Domes, we make sure the graphics and overall design really stand out. Our design team is extremely creative and can put the client’s vision together using the latest in computer aided design and graphics programs. Merging the client’s vision with reality is something we specialize in, and if we put our mind to it, there’s no project we can’t accomplish.

Our inflatable dome tents come with all necessary set-up accessories, including blower system, ground tarp, and ropes. All instructions for a safe and secure set-up are also included. We can design and manufacture almost any design you can come up with. Contact us for a free rendering and quote. Local deliveries and set-up are also available upon request.