70 Foot Lobster for Taste of Maine 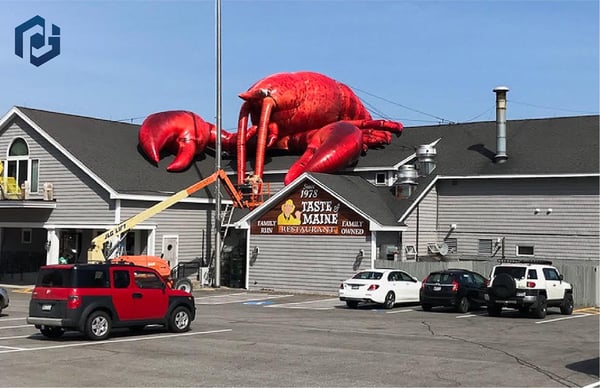 Our inflatable animals inventory is full of a wide variety of insects, mammals and aquatic life. They are available in small (10-foot), medium (15 foot), and large (25+ foot) sizes to accommodate just about anyone's different needs. In total, we have over 1500 individual inflatables in our entire inventory. Another sector that we are very proud of is our inflatable replicas. We can take any figure, shape and it's patterns and create unique inflatables of just about any size. One of the most requested inflatable styles is our inflatable can/bottle replicas. Another is our realistic oceanic inflatables and this lobster is one of them. As mentioned before, the typical size for an inflatable lobster is 25 feet or smaller. Taste of Maine asked us to work with them to create a huge inflatable lobster replica for their restaurant and it turned out great!

What do we have to offer?

We manufacture everything in our South El Monte facility just outside Los Angeles. We house a complete design team and a full production team which work in hand in hand with each other to create some of the most realistic inflatables possible. As you can see above we created this mockup for our clients over at Taste of Maine for them to see what their idea would look like. As a matter of fact, we provide our free rendering services to all of our clientele because it is a method we know facilitates the exchange of ideas.

Taste of Maine had this idea of having a rooftop inflatable on their building for their 40th anniversary. A giant lobster to be specific. They provided specs on the size of the building and on how big they wanted the lobster to be and we agreed that in the end a 22 foot tall by 70 foot lobster would cover their building the way they envisioned it. This behemoth weighs a total of 660 lbs. The replica was definitely something that we didn't have in our inventory since the largest size we offer is a 25 foot (on longest side), but we worked with our design team to create the graphics and patterns necessary for this large project. Once everything was approved, we manufactured it exactly to the Taste of Maine's vision and we could be prouder.

Why buy/rent a large inflatable?

This particular lobster was purchase but we do offer a rentals program. Obviously, since it is far outside our typical inflatable size parameters it is considered a custom inflatable. When passerby see such a sight, it is bound to stick with them. You can't unsee a 70 foot lobster! As a matter of fact, its large size makes it clearly visible from afar and its bright red just adds to that. Any rooftop inflatable is meant to attract attention to your business because it is not a common sight. Many businesses adorn their buildings with banners or smaller promotional products but in order to take it to the next level you need something huge!

Taste of Maine already produces great food that has fascinated customers for the last 40 years! When they added this large inflatable lobster to their building for their anniversary it attracted attention from the news! The local news took note of it and they told their readers/viewers about it! The headlines for the stories about the lobster are great too! One of them read "Need More Butter: Giant Lobster Perched On Top Of Restaurant." In essence, it was a great success and we wish Taste of Maine the best for years to come following their 40th anniversary.

Once this 700 pound Giant Custom Inflatable Lobster was completed and shipped to the Taste Of Maine Restaurant it had to be lifted onto the rooftop with the assistance of a giant crane so that the installation could be possible.  Our talented installation crew had to place about 25 heavy duty eyebolts around the perimeter of the rooftop in strategic locations by way of a giant boom lift. There were well over 60 tethers that were used to secure the Giant 70 long by 55’ wide Inflatable Lobster. All ropes had to be tightened just right in order to evenly balance the pull tension of each tether so that the Giant Inflatable Lobster can be able to sustain wind conditions as high as 40 miles per hour. Two 110 volt, 1 horsepower continuous air blowers were used in order to sustain the internal air pressure for the Inflatable Lobster and both must be kept running 24 hours a day.  A dedicated 20 amp breaker was used for each blower to prevent any type of circuit breaker interruptions.Once all the ropes were tied and secured the inflation process took a little over 5 minutes.One of the Installers mentioned “How impressive it was to witness first hand one of the largest Inflatables we’ve ever built, it was an incredible sight to see”.  They also noticed how quickly this Giant Inflatable Lobster attracted so much attention once it was fully inflated. Not only did it attract many passing by foot or vehicle who stopped to take pictures the news media both newspaper and TV we’re out in force almost immediately to cover the story of the world’s largest Inflatable Lobster.   This certainly was an attraction worth seeing. If you’re ever near the city of Woolwich in the State of Maine pass on by and see this great Inflatable work of art first hand, you won’t be disappointed.

Why work with us?

Our talent doesn’t end with our Inflatable Design Team.  As a matter of fact, for the past 35 years we have been creating some of the most incredible inflatable creations. These range from large inflatable structures (tents, domes, arches, tunnels, etc..) to custom inflatables like props and replicas. We are also able to create inflatables from scratch and even color match any branding guidelines for the inflatables to match your other promotional products. We also have an eclectic staff in our production department with many years of experience, skill and talent.  This entire Inflatable design process involves having an all star team in every department who can make this work in unison, from our Inflatable design team, to our reliable & efficient printing department who can scale and print almost any patterns for any customized Inflatable to whatever size desired to our sewing department who are able to assemble these giant jigsaw puzzles and just about solve almost any sewing problem that needs attention.  Our talented Design & Production staff makes these giant custom Inflatable masterpieces almost on a daily basis.

Both Promotional Design Group and Creatable Inflatables have been around since1984 and we’re proud to say that we manufacture all our Inflatables in the United States in the sunny State of California and in the beautiful City of Los Angeles.  If your ever in the City of Los Angeles and are looking for an Inflatable company nearby, come on over and we’ll give you a tour so you can see our manufacturing facility first hand and also witness our state of the art equipment that we use to manufacture all our Custom Shaped Inflatables.

Give us a call or send an e-mail with your Inflatable Design request and we will provide you with a 3D rendering of how great your Custom Inflatable will look.