This giant inflatable dinosaur won't only amaze kids, but really anyone walking by this magnificent 25' beast. If this thing was real, people would probably be terrified by it. This inflatable T-Rex was specifically manufactured to leave an impression. Any building, park, or lot will become much more visible with a huge dino next to it that just brings in curious onlookers. A big scary T-rex is sure to get attention and make some memories, even if they only end up in children's nightmares. Even the teeth look sharp, but it's a good thing they're not. This is one safe, harmless, giant dino. Tell that to the guy in the image below. People love big animals, we just can't help it. We're amazed by big things. And this giant inflatable dinosaur is no exception. This giant inflatable dinosaur can be rented or purchased. This dino is perfect for museums or children's events. In the image below, you can see our 25' dino set up on the rooftop of the Discovery Science Center, which is a fun science centered museum for people of all ages. 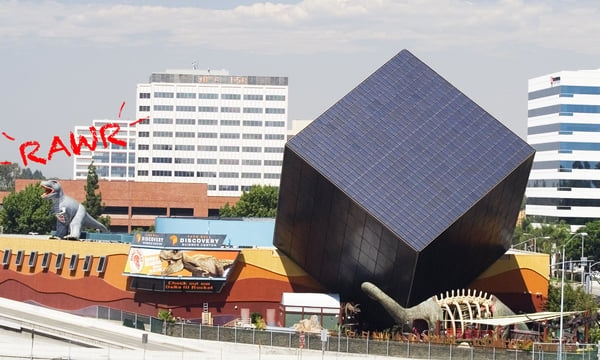 Although we're not fully certain if dinosaurs had feathers or scales, we decided to go with a more scaly cracked skin look, reminiscent to elephants, for the skin texture. This particular model is an oldie, but a goodie. Initially, this inflatable T-Rex, was hand painted using an airbrush system. Since then, we've updated the art and can now digitally print the entire dino instead of hand painting it, which was awesome, but would take much longer to produce. Popular Tyrannosaurus Rex depictions often display the large dino as more lizard-like, but modern evidence shows that these huge dinos could have possibly had feathers, since recent fossil discoveries indicate the formation of feathers. Can you imagine a huge fluffy T-Rex?

Custom inflatable dino, made to last.