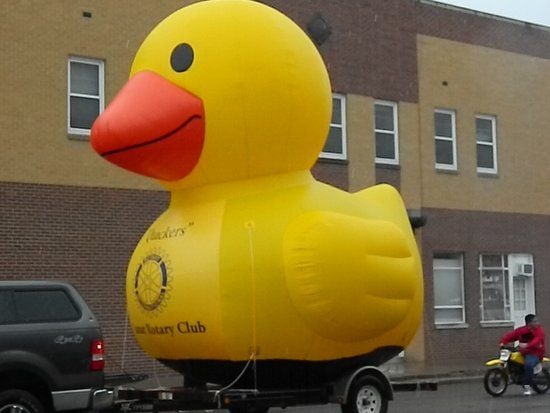 This inflatable duck is one of our most popular inflatable animals that we've produced. It has been used for all sorts of events ranging from an exhibition at a college, a book signing for an author, a mascot for a rotary club and even an album’s theme! A yellow rubber ducky is typically 3-4 inches long and about 3 inches tall. Our duck inflatable is not teenie tiny. We have multiple sizes available in our inventory and there are also different styles. Now although they look fairly similar they are not. The one above is one of our most modern iterations of the duck. Below this body of text you can see the same one with people, for size perspective, and the one on the right is an older model we made many moons ago. The one on the right is actually airbrushed and it is not digitally printed the way all of our new inflatables are. The new inflatables are now printed and then coated with a U.V. inhibitor coating that will be protected from fading and scratching along with paint peeling and other unwanted issues.

Below you can see a smaller duck we made for UCSB that they installed on their front entrance. The entrance in itself is already beautiful but the rubber ducky inflatable added just the right amount of flair to the entrance that it didn't look as if its image had been destroyed but rather it was an elegant touch. Now, they didn't rent just that one. They actually rented a couple from our inflatable animals inventory. There was a book signing event at the college for a book called "Moby Duck" and they installed multiple ducks throughout campus to let people know about the event. The two below are on campus.

The duck on the right (below) is another installment in UCSB. The inflatable ducks below (left) are for Primus. The four were used in a marketing campaign where they would do photoshoots with the ducks and then they would go on tour with the ducks as inflatable props for their stage decorations. The photoshoot came out amazing and we are happy to have seen the results because they used the inflatables in a way we couldn't have really imagined. This was one of the first times we worked with them and they loved the idea of using inflatables in their shows so they eventually came back and got some inflatable astronauts that we also manufactured. A large inflatable rubber duckie is not an easy thing to incorporate into your marketing strategy, even less 4 but they did it and it turned out magnificent!

Rubber ducks are cool, but the bigger they are the cooler they are, so we have created the coolest ducks possible! We have them in our inventory where you can rent them or we can manufacture a brand new one for you if you are interested in buying one. They are extremely easy to install and they are very easy to secure with ropes. Their vibrant yellow can be seen from afar and the bigger they are, the easier they are to see. We have seen people parade them, install them on roofs, and even set them up throughout their facilities. We are surprised by how simple the design on these is and how popular they are. Peter Ganine made all sorts of sculptures but none of them became an iconic toy that everyone can easily recognize the way the rubber duck did.

Want to create the unimaginable?

Infinite ideas are just waiting to come into existence. Let us come up with some together.